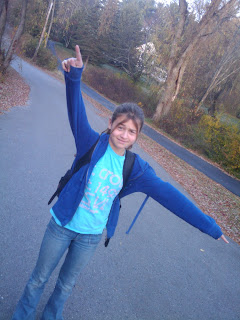 I took Emma with me last night to run some errands (picking up some skis and single-wall stovepipe (that sounds like a weird, mad-scientist, shopping list, doesn't it?)) and she started asking which stores we were going to go to. I decided to tease her a bit, so I replied, "We're going to three stores."

"Honestly, except for Home Depot, I don't know; I just know where they are."

While I was serious about not knowing the names, I knew where the two ski shops were. However, Emma was hoping that I was taking her to a hair-cutting salon, and so kept asking me in little ways while we were out and about.

While we were checking out at Home Depot, Emma asked, "Is the third store within walking distance?"

"Given enough time, everything is in walking distance," I replied.

I pointed toward the front of the store, "That way."

She realized I wasn't going to tell her anything specific, so she stopped asking questions.

As we approached the car in the parking lot, a little pedantic part of my brain realized that I had pointed the wrong way while I was in the store. "By the way, the store is actually more in that direction; not that you know where anything is in relation to this parking lot..."

It was a really cute moment.