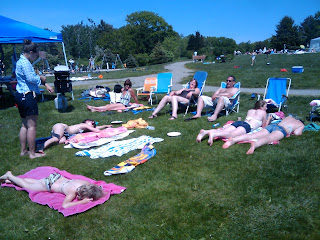 We spent it at Fort Foster in Kittery, ME. A nice, quiet day at the beach.

I'm hoping we leave in time to beat the traffic.

Posted by John Anderson at 1:52 PM No comments:

Fiona and I were being lazy this morning and just lying in bed and chatting while listening to the sounds of the kids as they entertained themselves.

Then we heard the theme to Little House on the Prarie coming up from the Great Room.

"There are worse things they could be watching," replied Fiona.

Posted by John Anderson at 1:22 PM No comments:

Last Monday, Fiona, Emma, Deidre and I all played hooky and went to the New England Aquarium in Boston for a quick little getaway.

A good time was had by all.

Posted by John Anderson at 9:44 PM No comments:

Emma treated us all to a poem she wrote at school today, and it was so good, I wanted to share it with my audience here.

Isabel Meets The One And Only

Isabel meets her one opponent.
Will she leave or will she own it?
Her little brother was filled with glee,
Until he ate those last three peas.
Isabel's mother called and said,
"Go change your brother on the bed."

Up in the room, the right place,
Isabel saw his ugly face,
Which hurt her eyes, wow, now that's a surprise.
Now listen to that baby's cries.
Now he smiles nice and big,
His teeth were sharp as a pig's.
The little baby stole the wipesters.
Wow! That is a stinky diaper.
Her nose was burning, her eyes were bare.
The baby gave her the evil glare.

Her hair was burning, every bit.
She turned around and he was eating it.
Isabel did die that night,
Isabel died from so much fright!

While she was reading it, it looked like she was reading from a printed booklet, but after she read it, I asked to see it and then realized that she had written it. Sure it's a little rough around the edges, but for 10 minutes of work, it does show a lot of potential.

My sweetie loves me 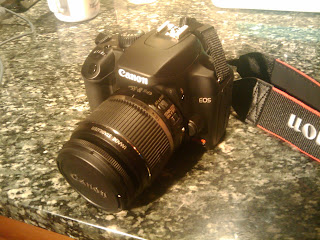 This year is our 10th anniversary (9/11), but she didn't want me to go through the summer without having access to this to capture the moments.