I stumbled across a nifty little website today that allows one to create "word clouds". The size of the word represents its frequency of occurrence in the body of text analyzed for the word cloud. The article that brought this to my attention is here, and this is the graphic that they had in the article:

This is the "word cloud" for the most common words used by respondents to a Pew survey asking them to describe Congress. The survey was conducted just prior to passing the Health Care Reform bill.

I found this little web app pretty cool, so I went and played around with it a bit, and then was struck by inspiration. What would a wordcloud look like for the Health Care Reform bill? 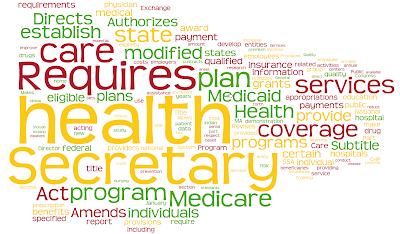 Unfortunately, I couldn't copy the entire 2000+ pages of text from the loc.thomas.gov PDF, so I copied the summary of the bill and used that to make the wordcloud. Note the prominence of "Secretary". About as prominent as "Commissar" back in the USSR, eh? The size of "Requires" is pretty scary too.

But then inspiration struck again. How would the wordcloud of this, the latest legislation from the United States, compare to our first piece of "legislation"? 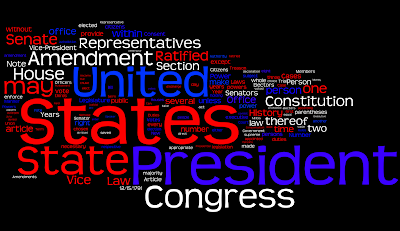 That, my friends, is the wordcloud for The Constitution of the United States and the Bill of Rights. Even with an Amendment dealing with specific limitations as to the Office of the President, the "States" are still more prominent than a single person, or even the two groups of legislators.

Perhaps our laws today should be written more like the Consitution than the recent Health Care Reform bill, focusing on the States, rather than specific people in the federal government.
Posted by John Anderson at 1:52 PM No comments: