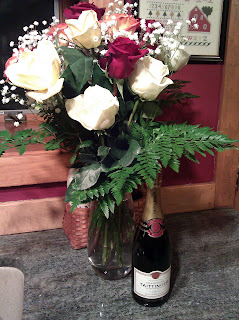 ...but you have to admit I had a pretty good excuse*.

* 24 hours into a 5-day antibiotic/steroid regime for a severe chest infection that hit me like a ton of bricks on Friday and I'm just about up to 90%. 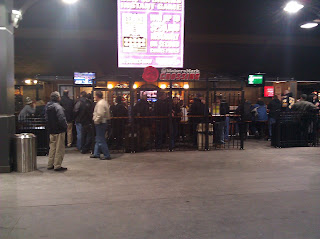 So, for the past two months, I've been working on this project for HR... excuse me, I mean HC. Now this project is somewhat special because it was a test for hiring outside contractors to do the programming so as to relieve the regular programmers from having to do the coding for this project. Instead we're on conference calls to New York trying to convey to the contractor and the project lead enough about our internal databases and processes so that they can do the coding that I could have had done in half the time.

But at least I don't have to do the coding.

Now, this is following closely on the heels of two of our six person development team leaving the firm, the departure of each resulting in me taking up half of each's workload. Also thrown into the mix is my having to train a new person hired to replace just one of the former team members. He knows our programming environment, but not our internal infrastructure and processes.

Simultaneously with the above, our Sharepoint specialist is rolling off the near two year effort to upgrade all the disparate Sharepoint sites in the firm to one server running the latest and greatest version of Sharepoint (well it was the latest and greatest when we started, but that's a whole other post).  While she was a fine programmer when we were using classic ASP, during the two years we had moved on to ASP.NET and so she needed training in that. By virtue of her being a regular member of the team, she knows our internal infrastructures and processes, so at least I didn't have to cover that.

Then I learned that we're going to hire a contractor to take over the big staffing project that was the main responsibility of one of the departed team members. He too needs to be trained on all of our internals. His arrival coincided with the new guy just caught up on our internals and having started with his projects (needless to say, that took some of the load off me, but not all of that half that he's destined to take over).

So now my little story has almost caught up to the present. I arrived at work this morning to find that the head of HC has announced via a firm-wide email that the HC project that I haven't been bothered by having to actually code over the last few months will be launched tomorrow and that there will be an introductory presentation at the weekly Friday morning (tomorrow).

One marathon coding sprint later via a flurry of emails and tag-teaming the source repository later, things are beginning to look like we will have the end-user facing piece ready for tomorrow and can finish up the rest of the reporting next week. As my boss starts making noises like this is good enough and I can depart, I realize that while I'm not going to make the 6:25 train, but I can still go to North Station, grab a stool at the bar there, and savor a well-deserved Scotch (neat) while I wait for the 7:35.

Of course, what do I find when I get to North Station?  That there's a Bruins game tonight and that the bar is packed.

I need a drink.

Posted by John Anderson at 7:29 PM No comments: 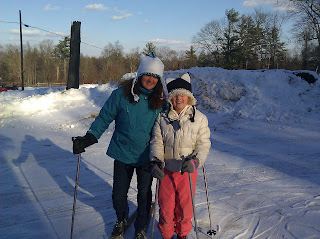 Fiona and Deidre are off for some cross-country skiing before retiring to the hottub.

Posted by John Anderson at 2:23 PM No comments: 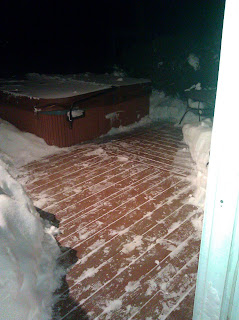 While it did take me about 90 minutes to plow the driveway, Fiona took care of shoveling the most important part of the property; the path to the hot tub.

All told we finally ended up with a little over two feet of snow. Commuting will be quite fun tomorrow.

Posted by John Anderson at 7:12 PM No comments:

"Do you realize the street value of this mountain?" 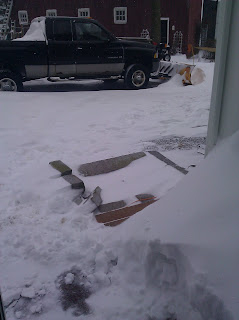 The white stuff is piling up pretty well outside, though you wouldn't think so from this picture. The prevailing wind comes right down the drive and keeps it pretty clear.

So far we have about 18" (yes, INCHES) of snow. The non-driving kids are all in the barn pretending to be stranded there a la "Little House on the Prairie".

I'm off to do my first run at plowing the drive.

Posted by John Anderson at 12:04 PM No comments:

The hatches are battened... 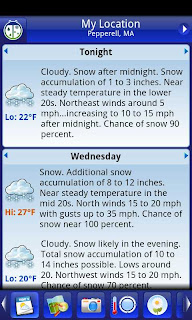 ...the firewood is stacked on the front porch and the kids are thrilled that the schools have already called tomorrow a snow-day.

I'll be working from home tomorrow as well, in between bouts of snowplowing.

Will the local news channels call it Snowpocalypse or Snowmaggedon this time?

Posted by John Anderson at 9:28 PM No comments: