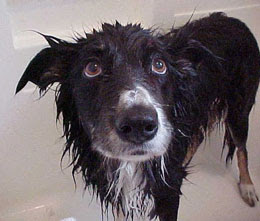 I had been watching the radar all afternoon, and I had seemed to luck out. The worst of the storms were passing Boston just as my day was ending, and the next front seemed to be 2 hours away. So off I went.

All was well all the way out Route 2 to 495, where I saw that the traffic was slowing as traversed the on-ramp.

"Damn, if I could have seen this before I took the exit, I would have stayed on 2."

So, I merged into traffic and made my way into the middle lane. As I progressed up 495, it became apparent to me that traffic was slow, not due to an accident or anything like, but due to the sky was turning quite dark, quite quickly.

"I am definitely going to get wet before I get home."

The low-hanging dark clouds were fascinating to see from the back of the bike. Changing quickly due to the winds, it almost seemed as if I could reach up and swirl them with my own hands.

I reached 119 and headed towards home. Slowly, I came out from under the dark clouds.

"Maybe this is my lucky day. Maybe I've gotten past the rain line."

I could see into the distance, and the air was clear. No rain ahead. I was going to make it home dry.

Then I came to the intersection of 119 and 225. I ended up first in line in the right-hand lane, next to a JEEP in the left-hand lane. Both lanes could go straight. I was going to be first to the lane merge past the intersection.

The light turned green, and off I went. I quickly advanced up through the gears and was easily ahead of the JEEP by the time I got to the lane merge when it happened.

Judging from the amounts of standing water I ran through later down the road, Groton/Pepperell must have gotten about 2 inches of water dropped on them in the next 15 minutes. For about five of those minutes, I could barely see the road in front of me. People were pulled off to the side of the road to wait out the cloudburst. No one was moving faster than 10 MPH.

Needless to say, I got soaked.

When I got home, I looked at myself in the mirror. The only thing dry on me was my head because of the helmet. I was drenched.

At least now I know I can safely ride my motorcycle in the rain.
Posted by John Anderson at 6:08 PM